Infants sometimes have flattened areas on one side or back of their heads, called deformational plagiocephaly or brachycephaly. These conditions are typically caused by:

– Position of the baby while in the womb
– Amount of time a baby spends on his back–in crib, baby swing or carrier
– Torticollis, a condition in which a neck muscle is tight and limits the baby’s head motion

The Cranial Remodeling Program is for children who are 4-6 months old. This is the ideal time for optimal head correction because the skull has not yet fused and there is still rapid brain growth. The conditions that we treat are:

Prosthetic & Orthotic Institute offers specialized care from an experienced pediatric team. We provide comprehensive assessment and education by a board-certified orthotist and education on developmentally appropriate ways to encourage self-correction. Plagiocephaly treatment may include:

When referred to us early enough, more than half of our patients who are evaluated do not require a helmet due to our focus on care giver education, monitoring and team approach to treatment. If a cranial remolding helmet is needed, it is our goal to complete treatment with one helmet. We answer your questions and provide you with everything you need to know so that you can properly apply and care for your child’s helmet. We will closely monitor changes in your baby’s head shape to track progress. 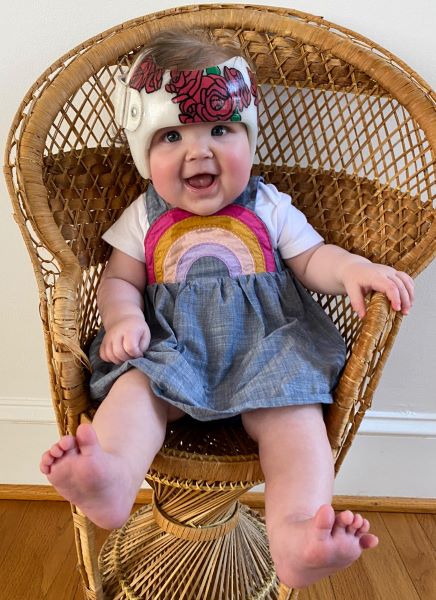 The cost of our cranial helmets is highly competitive and affordable when compared to our competitors in the area.

Many babies do not require treatment with a cranial remolding helmet because they respond well to repositioning techniques caregivers can practice at home, especially when we first meet them at an early age. The earlier repositioning starts, the more likely it is to be successful. With a prescription from your doctor, we offer an initial assessment at no cost to you. Ideally, we can do our first evaluation and obtain baseline measurements at 2-3 months of age. Although we would never utilize a cranial helmet at this early age it is an ideal time to begin education on repositioning and tummy time for the most desirable outcomes and the greatest chance of not needing to use a cranial helmet.

Get Started Today. You Can Reach Us through Our Contact Form.

What is deformational plagiocephaly?

Deformational plagiocephaly, also referred to as positional plagiocephaly or flat head syndrome, is a positional head deformity that affects the skull, making an area of a baby’s head appear flattened or misshapen.
The skull is made up of several “plates” of bone which, when we are born, are not tightly joined together. As we grow older, they gradually fuse, or close. Once this happens a baby’s “soft spot” is no longer palpable. The absence of the “soft spot” often indicates that a child is fully fused.

In an effort to prevent deformational plagiocephaly, we would never recommend sleeping your baby on their stomach. Specialists involved in treating deformational plagiocephaly support the AAP recommendation which now goes a step further and recommends frequent rotation or repositioning of your child’s head. So, when your baby is awake and supervised, make sure he or she spends plenty of time on his or her tummy. Please refer to information on tummy time – Tummy Time Info.

QUESTIONS?
WE ARE HERE TO HELP.